R. Scott Osborne is passionate about his faith, about his family, about his church, about the Jewish roots of Christianity, and about investing in the lives of others. He wants everyone to know that “God so loved the world that he gave his only Son, so that everyone who believes in him may not perish but may have eternal life.” (John 3:16, NRSVCE).

Scott lives in Columbus, Ohio with the love of his life, Daryse, to whom he has been married over 45 years. They both grew up in Christian homes and have served Christ together since their wedding. They are blessed with two daughters, two sons-in-law and eight grandchildren. Chloe lives in Florida with her husband and three sons, Hannah lives in Ohio with her husband and five children.

Through the years, Scott served in various lay leadership roles in his local church, during which time he regularly taught the Bible, led small groups, and was active in worship ministry. He also volunteers at crisis pregnancy centers where he consults with male clients and leads post-abortion recovery groups for men. Scott has two degrees in engineering and spent most of his career in the medical products industry. His career “fun fact” is that he is a co-inventor on eight U.S. patents. He now works in a senior leadership position at a university. 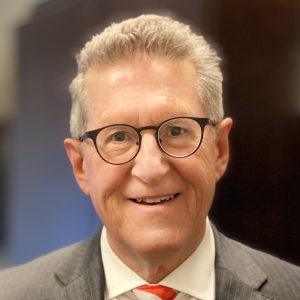 Get Your Free Ebook

When and Whom to Bless

There is almost never a bad time for a blessing. Saying “goodbye” before heading out the door in the morning can be a time for blessing. Encouraging someone in...
Read More

Why We Speak Blessings

First, our blessing conveys that we acknowledge God is the loving, sovereign, omniscient Creator. “The earth is the Lord’s, and the fullness thereof; the world, and they that dwell...
Read More

What People Are Saying

“Just want you to know that I have been using your blessings book to pray with people, send them notes, etc. Thanks for doing this book as it has made it very easy to pray with and speak blessings to people, etc.”

“I recently purchased your book and I love it! It truly is a Blessing. I have to tell you, each day I put a note in my daughter’s, lunch for school. The other day I chose one of the blessings out of your book. She came home and said “mom, I loved your note today, it was the best and it meant the world to me.” She’s 8 years old and “gets it.” Thank you for giving our family a wonderful tool to use to build into our lives God’s truths.”

“Your book is in front of me…I’m picking out certain blessings for my husband and me to speak over our children…and I just wanted to tell you what a blessing your book is to us. Thank you for obeying the Lord and writing it! And when I see Pastor Sam’s name on the forward, the book seems to have even more significance for some reason.”